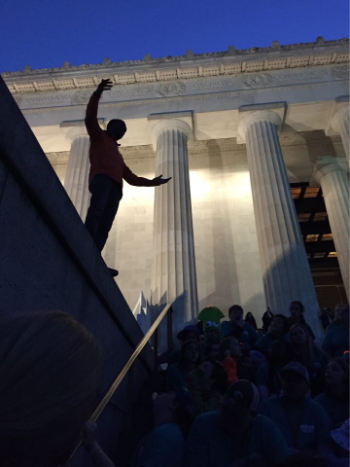 School trips are the backbone of experiential learning. Orange Sky Travel, a regional field-trip logistics company, and Dew Productions, LLC, have teamed up to offer “One Voice: A Black History Narrative” performances on day, overnight, and continuing education trips. The partnership heightens an old-fashioned “field trip” into an immersive one-of-a-kind adventure that a book or classroom is unable to do alone. Maybe the full show experience (90-minutes) or the more common (60-minute) show fits in to your trip, either way, we know how to tailor the performance for your student group.

For the last 10 years, JDew has been showcasing the actual words and wisdom of several African-American icons at school assemblies, awards shows, and cultural experience, but now, Orange Sky Travel provides the theatre experience on-location all around the United States!

In addition to the voices you’ll hear from JDew:

Your group will also see and hear from several Southern seniors in recorded vignettes. These local heroes will recount their first-hand experiences of “the way things were” in many segregated Southern towns. From a retired professor’s civil disobedience of a library sit-in of 1960 that integrated an entire county, to a pastor’s four days in jail with Dr. King, down to a teacher’s tears surrounding a time when he was embarrassed in a public building 60+ years after the incident, these lesser known “voices” will cause all audience members to use their own voices for good and edification. 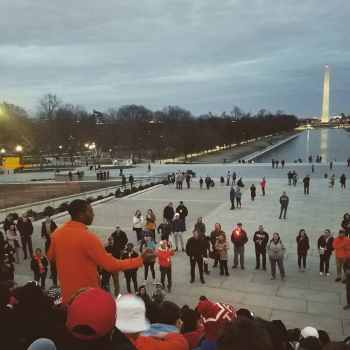 Exploring the Washington Mall and our nation’s monuments is an experience for nearly a million students each year. Orange Sky Travel hires professional, licensed, guides for that experience and then adds a historical element that will even bring in bystanders within earshot. Dr. Martin Luther King, Jr. changed the course of the world with his “Dream” from the steps of the Lincoln Memorial, in 1963. JDew takes the students to the literal cornerstone of the Civil Rights movement and places them in the environment where Dr. King spoke those words to life for the very first time. The Reflecting Pool at our nation’s capital will transform your students to witnesses of “The March on Washington for Jobs and Freedom” like they were there with Dr. King himself.

Much of the racial revolution of the 20th century has its roots in Atlanta, Georgia. From the historic “Sweet Auburn” community where Dr. Martin Luther King, Jr. was born and ministered, to the modern Centennial Olympic Park where the Center for Civil Rights museum stands, Atlanta boasts the birth of cultural foresight and unity. Schools have chosen to include “One Voice: A Black History Narrative” as an addition to their King Center experience and tours, and/or a bonus to their Coca-Cola Factory and Georgia Aquarium visits. Dr. King’s inspirational spirit commands a profound appreciation and reverence in the deep South. Come dream with us in Atlanta, Georgia!

Charleston, South Carolina is becoming more of a popular destination for schools that Orange Sky Travel serves. It may be the beautiful modern bridges, the colonial symbolism, or even the unique architecture that pulls you in closest. Whatever fancies your group about this town, let’s add the sights and sounds of Frederick Douglass, Muhammad Ali, Barack Obama, and MLK to the fun! Charleston spans over 300 years of American history, and “One Voice: A Black History Narrative” tells the story from then-til-now through the voices of the iconic African-American heroes. Let’s Look forward to a trip together to South Carolina, just like the congregants of “Mother” Emanuel church near Marion Square look forward to reuniting with their loved ones (The Emanuel 9) who perished just a few years ago during an evening of Bible study and prayer in Charleston.